first, let me say, i have NO flippin' idea what's going on w/blogger and pictures. it doesn't want to do any portrait style pictures, so you'll have to flip your head around :( sorry about that.

so, it was quite a weekend of winging it. it was a special surprise weekend for irene b/c we i didn't tell her we were going to see her best friend, rose.

here is a picture of me and irene close to the summit. mom was on the phone w/my uncle b/c my gramma has had a bad spell and they needed to talk a bit without cell phone cut outs due to the mountains. 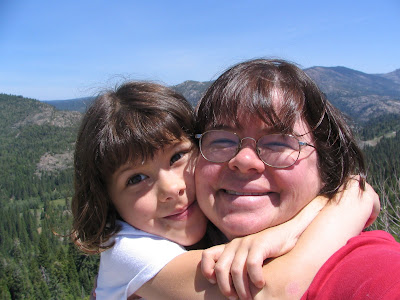 after arriving at rose's house (and tanya, curtis and little max's house too), i left irene there and proceeded to take mom to the airport so she and cousin vicki could go down to the grannies. i don't remember a whole lot of the trip to and from the airport. i did it pretty quickly - from novato to oakland airport and back in under 2 hours - that's pretty surprising.

so, the girls got to play with each other and i got to visit with tanya and curtis. poor little max felt that a fever might be fun to add to the mix. poor little guy was just not a happy camper in the evening. possibly an ear infection. just not a fun thing at all for a little guy who is not yet 2. we gave the girls some time to try and sleep in the same room. heh heh. at about 10:00 i got irene and put her in the front room where i was sleeping. she wasn't thrilled about that, but she was asleep in minutes. they had been reading and talking. it was fine. 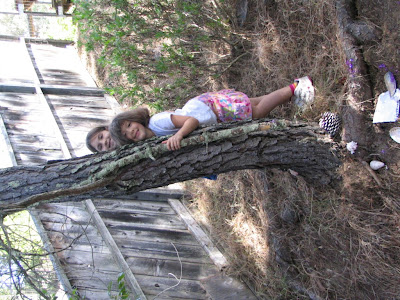 the next morning, the girls went out to play and fix up the little fairy house by the tree in the backyard. they made fairy dust (shhhh! how to make it is a secret!) and just had a really wonderful time. as i told tanya, i really wanted to take lots of pictures of them during it all, but didn't want to break the magic, so i waited until it was almost time for us to go. above shows them by the tree. below is the fairy house. 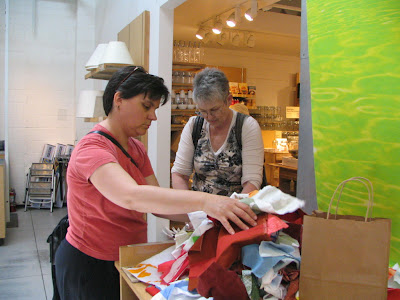 then it was off to berkeley. many many thank yous to jaye, julie, william, and pamela for accomodating us. i was pretty wiped out from almost 6 hours of driving the day before, so driving to berkeley was much easier than driving to daly city (though i really wanted to see jaye's remodled kitchen etc -- another time!).

we went to breakfast at Tacubaya - oh my DOG the chilaquiles were divine! irene had churros and they were made just right - not too greasy. yum! then we went to The Ark b/c the kids had been quite good - irene was pretty tired, but not whiney. william was happily drawing really wonderful pictures. pamela thought they were pretty snazzy too.

above is a picture of Jaye and Pamela looking through the merrimekko scraps at the Crate & Barrel outlet. i got some pasta bowls for us as ours (which we've had since we got married) were breaking or chipping. 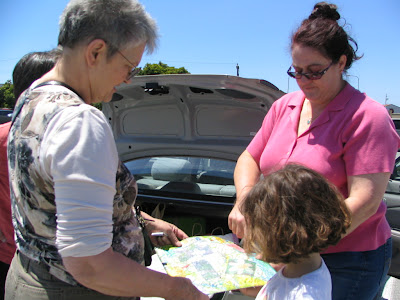 then it was on to the trunk show. here is Julie showing her paper quilt to all of us. you can see Pamela and irene and just a weeee bit of Jaye. 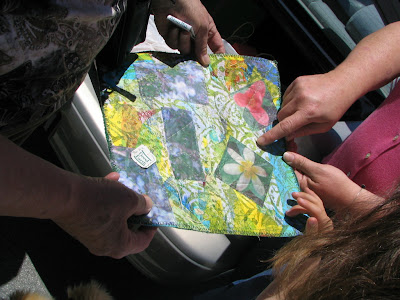 and here it is closer up - it was fun to feeeeeel it! 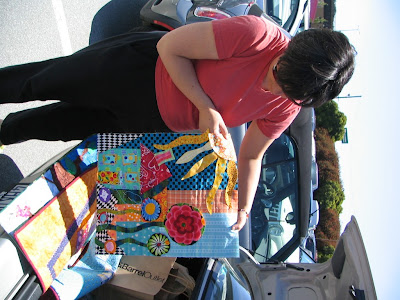 this is Jaye's My Quilt My Rules quilt that she made in Pamela's class yesterday. cool, eh? 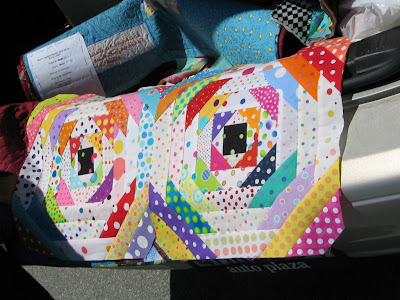 and here are her pineapple blocks -- i didn't realize that they were so big - they are about 12"x 12" i think. i love how bright they are. 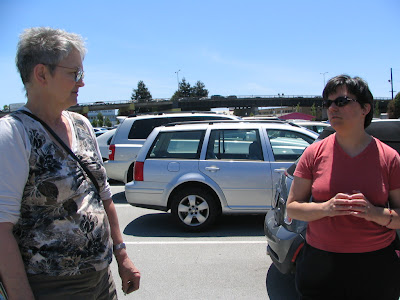 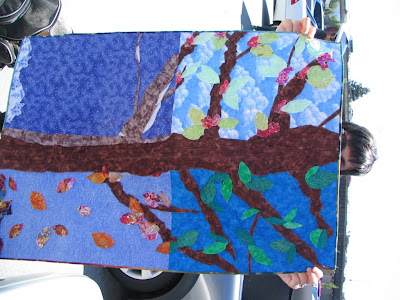 this is a reallllly cool quilt of Jaye's - the quilting (of which you can see none) is really nice and goes well with each season.

after the trunk show, irene and i started to head back. we stopped at the cool sculpture below. 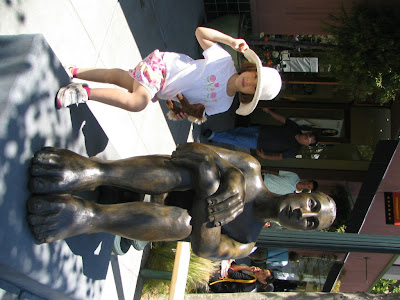 i'd wanted irene to pose like the sculpture, but she was having none of it :)
we were going to go to Peets so that i could get a coffee fix for the long drive home, but there were about a bazillion people waiting for coffee, so we went back to tacubaya 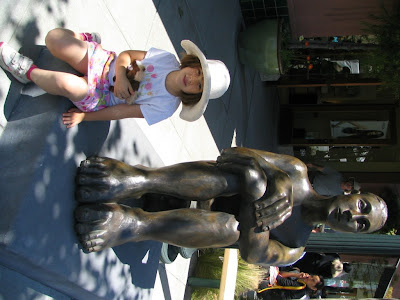 we got a limonata for me (fresh, lime pulp, deliciousness!) and agua fresca (fresas) for irene (again, fresh, very strawberrerry ;)). from there we stopped at hydra (where i'd parked my car) and we got some bath salts and handmade souap ends. they were having a sale on the salts! 50% off! so lovely! so we got a few different flavors of bath salts and then headed on our way.

i was very VERY close to running out of gas...i thought i could make it all the way to colfax (and i probably really could, but i didn't want to risk it). just after auburn (about 18 miles south of colfax) the car gave a "DING" sound - you know the one - the one that just about hollars "DUDE! HAVE YOU NOT BEEN PAYING ATTENTION TO ME??? YOU HAVE 12 DROPS OF GAS LEFT!!!" we got off at nearly every offramp using precious drops of feul only to discover NO GAS STATION at several of them...so, 2 offramps away from colfax, we hit paydirt! phew!

of course, b/c we'd gotton on and off the freeway so many times, we got to Cuppa Joe's (is that what it's called??) 15 minutes after they'd closed! this was very sad b/c i was dearly looking forward to a Toffee Mocha Freeze, and irene was looking forward to the Piña Colada smoothie. ah well. best laid plans and all that. we instead went to starbucks. it was okay, but not what i'd really wanted. but the caffeine was really what i needed to get me that last 1 1/2 hours home. it worked.

we got home close to 6 pm. irene was overtired (b/c why would you sleep in the car??) and didn't end up falling asleep until 9 something. poor thing. she also had a bit of a meltdown b/c we forgot her jams at rose's. normally, this would not be a big deal, but b/c she was so over tired, it was the end of the world. she hasn't mentioned them since! heh.
**edited to explain that jams are pajamas**

mom is still in escondido. no one is entirely sure what's wrong with gramma, but she's very delusional right now and apparently last night she was very pleased because her mother had come to see her. gramma is 92. hopefully the antibiotics (that she should have been given one week ago) will do some good. if this delirium is caused by the bacterial infection, it will go away. it's just a wait and see game for right now.
Posted by Unknown at 10:25 AM

Sorry to hear about your gramma.

Sounds like you had a fun trip. Those are really cool quilts.